Asian rhinoplasty is one of Dr. Kolstad’s most common procedures.  San Diego has a diverse community with people from every part of the world.  Many nose job surgeons will have the same rhinoplasty result for every face.  Dr. Kolstad specializes in achieving unique results that match your features as well as your ethnic background.

How Are Asian Noses Different From Those Of Other Ethnicities?

Many of our Asian rhinoplasty patients in San Diego are not looking to make a large dorsal hump smaller, but instead are seeking to augment a small nasal bridge. They are seeking refinement of the nasal tip, without it looking too narrow. Above all, they seek to retain the features unique to their ethnicity.

The goal of San Diego Asian rhinoplasty is simple: to enhance one’s natural features and refine the others in a way that balances the nose in harmony with the rest of the face. Achieving this goal is best performed by the hands of a specialist.  When examining a nose it is helpful to evaluate the individual subunits.

Asian noses can have tips that are often wide and prominent on the front view.  By reshaping the nasal tip cartilages the nose will appear more refined and in better balance with the other facial features.  Asian noses typically require significantly less excision of nasal tip cartilage (cephalic trim).  Most commonly refinement can be achieved by increasing the projection of the nasal tip.

Asian nasal tips have are typically less projected than other ethnicities.  By pushing the nasal tip outwards (increasing projection) the nose will appear more narrow and refined.  Dr. Kolstad’s preferred way of adding projection is by using cartilage.  The most common source of the required cartilage is the septum. Auricular (ear) and costal (rib) cartilage are secondary choices.  Dr. Kolstad does not use L-shaped nasal implants to increase the nasal tip projection.  L-shaped implants are easy for surgeons to place but can lead to disastrous outcomes if they protrude through the nasal skin.

A hanging columella (the strip of skin between the nostrils) is a cause of a drooping nasal tip.  Columellar ptosis can be corrected at the time of rhinoplasty to improve the infratip lobule (the lower part of the nasal tip). Reducing a hanging columella will make the nose appear less elongated on the profile view and less drooping on the front view.

Asian noses will frequently have a retracted columella (no visible strip of skin between the nostrils).  A retrused columella can be corrected by adding cartilage to the nose.  Typically a septal extension graft is used in combination with bilateral spreader grafts to create a more appealing columella.

Asian noses can have a prominent hump on the bridge.  The hump or convexity is most visible on the profile view.  Reducing the prominence of the hump can make a significant impact on the overall appearance of the nose.

Asian noses can also have very low projection of the bridge.  A flat nasal bridge can lead to challenges wearing glasses that require nasal support.  Adding height to the bridge will make the nose appear more slender and more refined.  Dr. Kolstad prefers to use either rib cartilage or silicone dorsal onlay implants to add height to the bridge.

The radix is the highest part of the bridge of the nose.  Asian noses tend to start lower on the radix of the nose, typically level with the pupil of the eye.  Caucasian noses start higher on the radix, around the height of the upper eyelid. 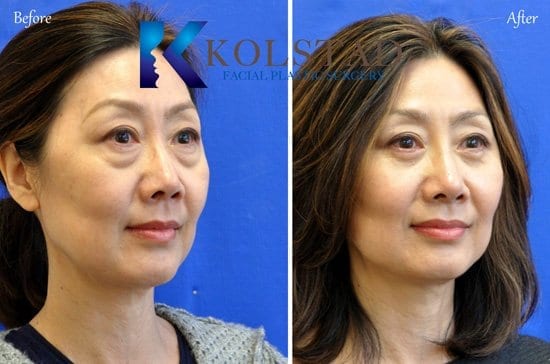 This patient did not like the shape or proportion of her nose.  She felt like the bridge was too small on profile view.  She was concerned that the tip of her nose was over rotated and created too much nostril show.

Dr. Kolstad used rib cartilage to add height to the bridge of her nose and  restructure her nasal tip.  The nose was rotated downwards creating a more natural contour and nostril balance. 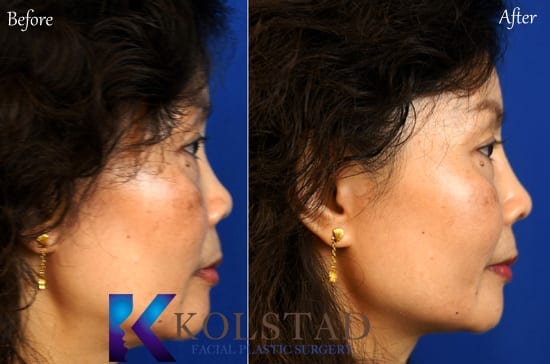 This San Diego Asian rhinoplasty patient wanted to improve the shape and balance of her nose.  She felt like the bridge was too small on profile view.  She wanted a tip that projected further and was more refined.

Dr. Kolstad used rib cartilage to add height to the bridge of her nose and  restructure her nasal tip.  The nose was made higher, longer and more narrow through complex cartilage grafting. 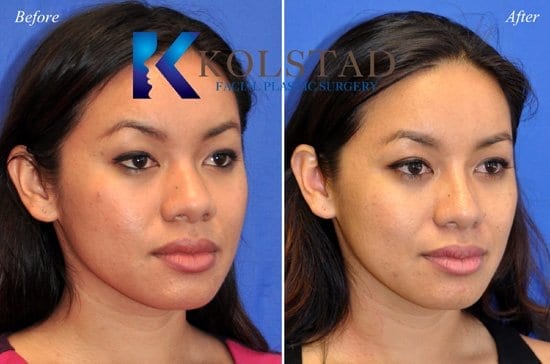 The patient felt that her nose was too wide and without definition.  During her rhinoplasty consultation multiple methods and techniques were discussed to achieve her goals.  She decided to pursue an implant to increase the height of the bridge of her nose.  The nasal tip was reshaped using cartilage from her septum.  The nostrils and alar base were made less wide. 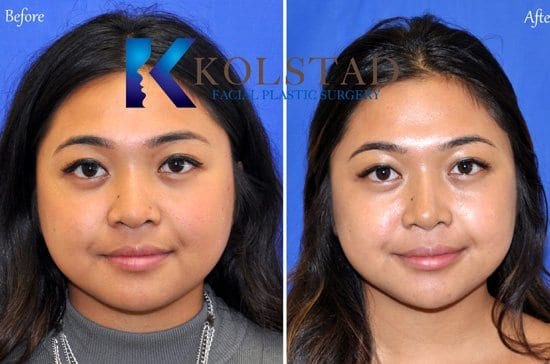 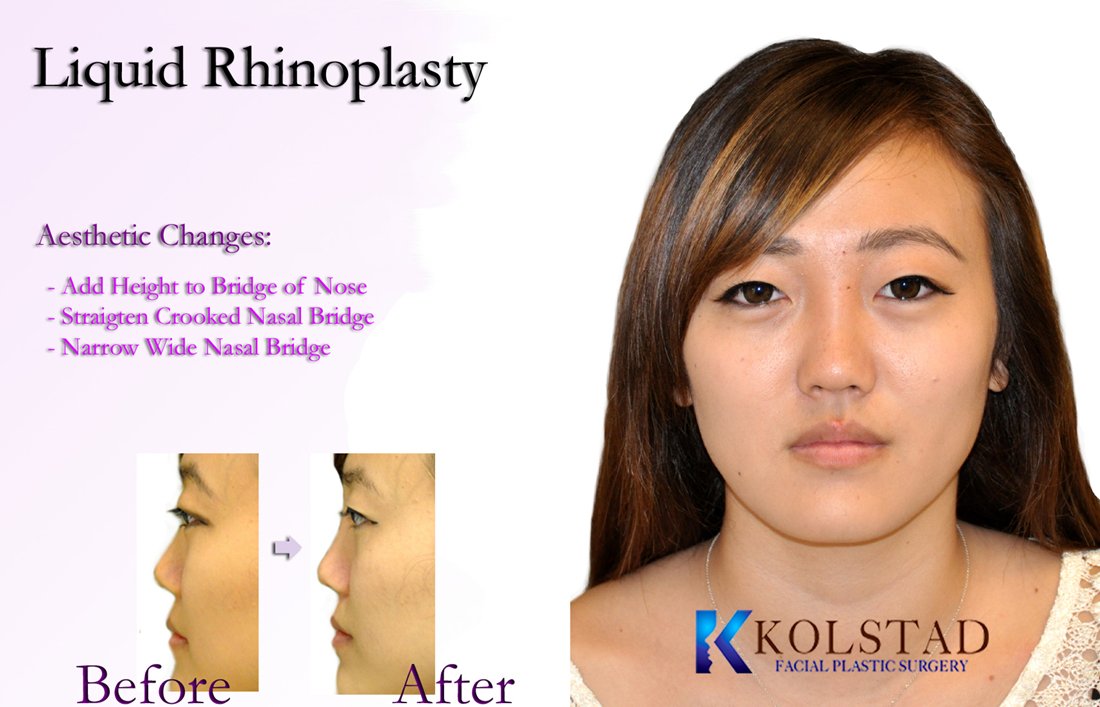 Nonsurgical rhinoplasty is a procedure performed in the office to increase the size of a nasal bridge or soften a nasal hump. This procedure is most often sought by Asian and African American patients looking to add volume and definition to the part of the nose that rests between the eyes.

WHAT CAN BE CORRECTED WITH LIQUID RHINOPLASTY:

WHAT CANNOT BE CORRECTED WITH LIQUID RHINOPLASTY: 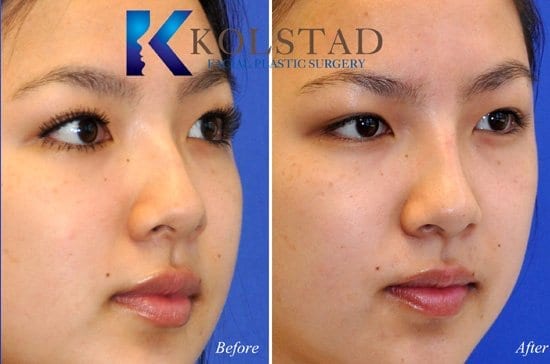 Not everyone that wants to changes the shape of the nose needs surgery.  Nonsurgical “liquid” rhinoplasty is a popular choice for many of our rhinoplasty patients.

This patient wanted to straighten the bump on her nose.  Dr. Kolstad used Juvederm to add height to the top of her bridge making the nose straighter and more feminine. 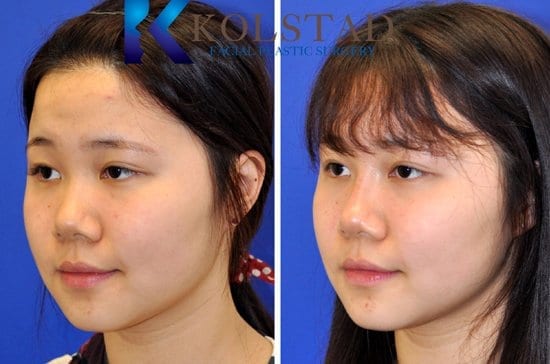 Not everyone that wants to changes the shape of the nose needs surgery.  Nonsurgical “liquid” rhinoplasty is a popular choice for many of our rhinoplasty patients.

This patient wanted to make her nose higher and more narrow.  Dr. Kolstad used Juvederm to add height to the top of her bridge making the nose straighter and more feminine. 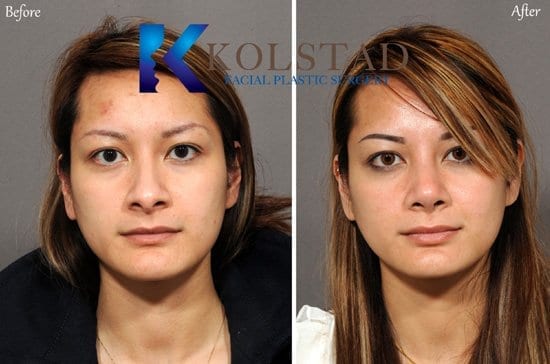 Every nose is unique.  This patient wanted the bridge of her nose to be smaller and more feminine.  The tip of the nose was contoured and lifted to a more natural angle.

WHAT TO EXPECT AFTER SURGERY?

The rhinoplasty cast will stay on for one week. After removal of the splint, your nose will be a little swollen and “puffy”. However, even when swollen, your nose will look better than it did before surgery.

HOW LONG DOES IT TAKE FOR THE SWELLING TO GO AWAY?

It takes two to three weeks for the majority of swelling to be reabsorbed from your nose. As the swelling is removed, your nose will become more contoured and the definition will enhance.

HOW LONG DOES IT TAKE FOR ALL OF THE EDEMA TO GO AWAY?

It takes a full 12 months for 100% of the swelling to be completely gone. The nasal skin must shrink-wrap to the new framework and definition. This takes time. Throughout the postoperative period, Dr. Kolstad will use medicines to contour the nasal skin and enhance your result.

WILL I GET BRUISES UNDER MY EYES?

It is common for some bruising under your eyes. With frequent use of ice packs the bruising is typically minimal and does not bother the majority of people. Dr. Kolstad recommends that his patients obtain cover-up make-up prior to surgery to help camouflage any postoperative bruising.

WILL I HAVE A “PLASTIC LOOK” AFTER SURGERY?

A frequent concern of our patients is looking plastic after rhinoplasty. There are limitless examples of unnatural, operated results. When surgeons remove too much structure, the nasal tip can look overly narrow.

It is very important to choose a plastic surgeon that specializes in operating on the face. Dr. Kolstad is an expert in nasal cosmetic surgery and is known as the face specialist, because put simply, that is all he does.

Rhinoplasty Before and After Surgery Instructions