Rhinoplasty for men in San Diego is a very common procedure.  Men and women share many of the same goals with rhinoplasty. Fixing a drooping nasal tip or bringing down a hump on the bridge are commonly performed for both men and women. The primary distinction is that men’s rhinoplasty should not be overdone. Shaving down a hump too far can lead to a feminine slope on the profile view.  Lifting the tip too high can feminize the nose as well.  Dr. Kolstad uses rhinoplasty to create a strong nose that is masculine in appearance. The nose is refined, just not too refined.

This patient wanted to improve the size and shape of his nose. He wanted to straighten the bridge of his nose. This patient was also concerned with the appearance of his under projected chin, especially from the profile view. He decided to combine his rhinoplasty with a chin augmentation in order to balance his nose and dramatically improve the appearance of his side profile.

Many patients choose to enhance their rhinoplasty with a chin augmentation with Dr. Kolstad to achieve a natural, artistic balance of their features and improve their overall facial appearance. 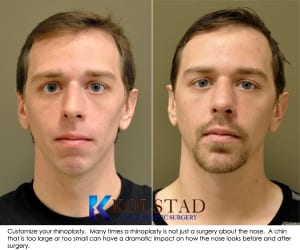 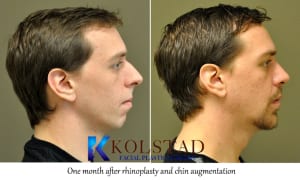 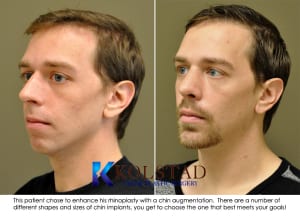 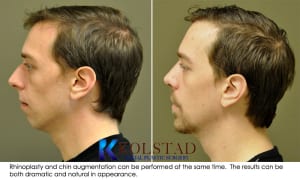 1) Nose Job San Diego 1: Customize your rhinoplasty. Many times a rhinoplasty is not just a surgery about the nose. A chin that is too large or too small can have a dramatic impact on how the nose looks before and after surgery.

3) Nose Job San Diego 3: This patient chose to enhance his rhinoplasty with a chin augmentation. There are a number of different shapes and sizes of chin implants, you get to choose the one that best meets your goals!

4) Nose Job San Diego 4: Rhinoplasty and chin augmentation can be performed at the same time. The results can be both dramatic and natural in appearance. 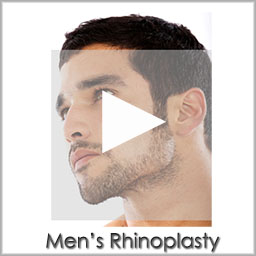